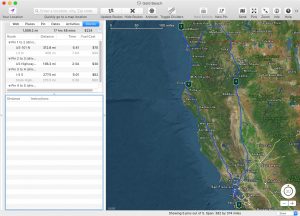 After our rather unsuccessful last trip, we decided to try a shorter one.  Several years ago, for a family vacation, we rented a house on Gold Beach in Oregon, so Marian and I decided to make a short trip back. 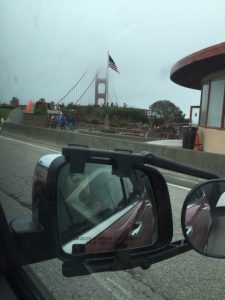 We eventually got to Eureka.  It was a long trip, with lots of traffic in the city and Petaluma.  Next time we need to find a closer place to overnight.

Our first stop was Shoreline RV Park in Eureka.  It was nowhere near the shoreline.  Their web site shows the water right up to the park, but that’s only at high tide.  Other than that it’s all grey mud.  The dog only got a single swim.  The neighborhood was loaded with the homeless, with their dogs loose.  It made walking the dog an adventure.  The park itself was clean, and nice, but right next to the highway, so it was a little loud.  The cable and wifi worked well. 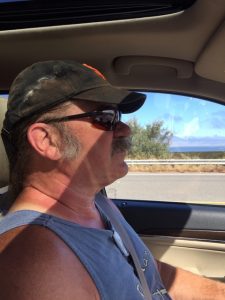 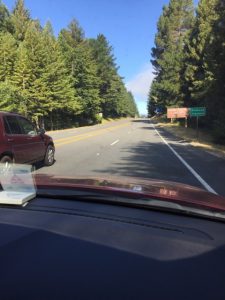 On the road again up to Ireland’s Ocean RV Park in Oregon.  Fortunately it was a much shorter drive.

This park lived up to it’s website.  You’re greeted by this cute lighthouse / observation platform. 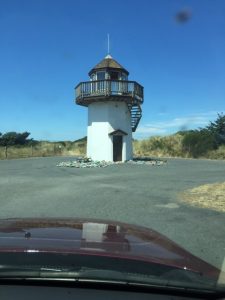 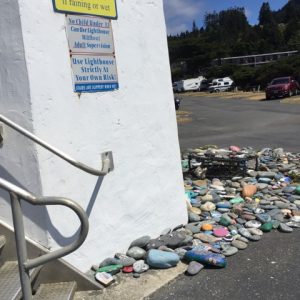 People paint rocks, and leave them at the base of the tower.

Panorama from either side of the tower.  You can see the short walk to the beach 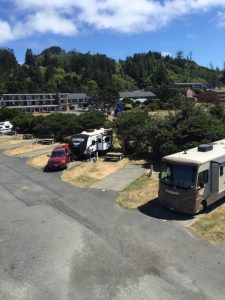 Here’s our camp site.  The park itself was nice, clean, full service, but the cable was not operative.  We barely got any signal at all.  The boxes were all torn apart. 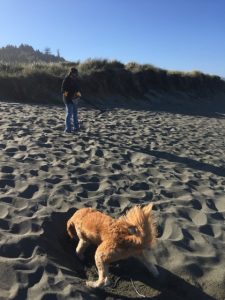 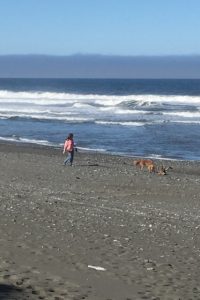 Fozzy learned to swim in the ocean, with breakers going over his head, and surfing in on the waves. 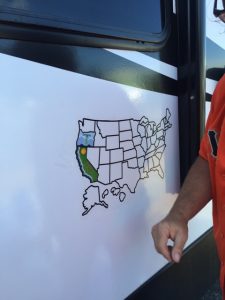 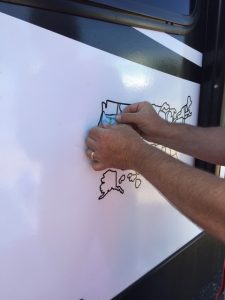 The ceremonial addition go the Oregon sticker to the map. 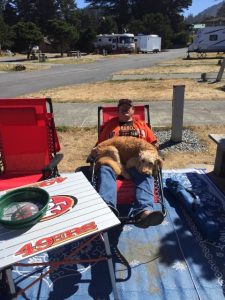 After that it’s time for a nap.

The temperature in Gold beach averaged 70 or so with the wind blowing like all heck.  It was cold.  Long pants and short sleeve sort of cold.  We made a lot of use of the heater.

So, up and over Grants Pass to I5 and Lake Shasta RV Resort and Campground. 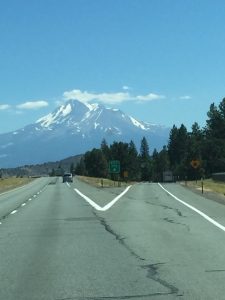 We had some great views of Mount Shasta on the way. 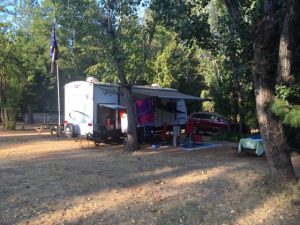 We were practically the only ones at the RV park.  The temperature was over 100.  Hot.  The RV park was not on the lake.  The lake was 1/4 mile away down the road. 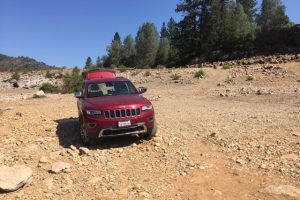 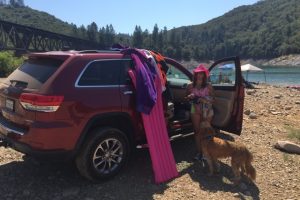 Fortunately our tow vehicle is a capable SUV.  I placed it in rock mode, and drove on down. 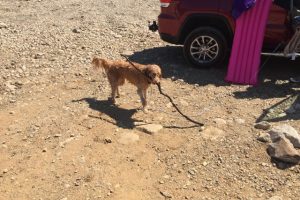 Fozzy has the Teddy Rosevelt idea.  Bark softly and carry a big stick. 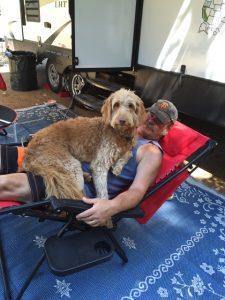 After that, it’s time for a nap. 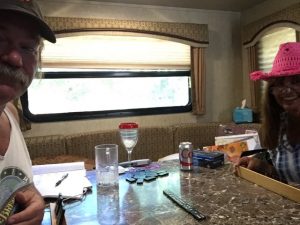 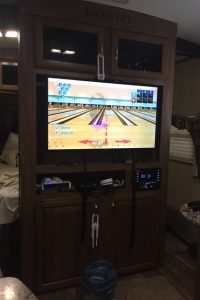 Afterwards, we retreated in to the air conditioning for Dominos and bowling.

It was a fun trip.  The Jeep performed flawlessly.  With the winding road and steep hills on the California to Oregon to grants pass we averaged 14.7 MPG.  In I5, flat and strait, we averaged 15.3 MPG.  The new motor is still breaking in, so it should get better.

Marian and Bob Exploring the world